Your Company’s Only Constant

Greek Philospher Heraclitus said, “Change is the only constant in life”. Too bad employee adoption of change isn’t always as constant.

Alas, with every change comes a barrage of opinions and reactions, ranging from ecstatic excitement to open hostility to everything in between. As a manager, it can put you off from ever trying to implement much-needed changes and improvements—is it really worth the headache?

And yet, to survive in a competitive market, you must change and adapt. It’s the human way. Though it may be painful, it’s a vital part of the growth process and it’s up to you to lead the way.

Sometimes, the needed change is a company-wide overhaul. Sometimes, it’s just a simple pivot within a plan.

Only one-third of strategic initiatives actually turn out exactly as designed. Human nature, production realities, and other unforeseeable variables affect the process, and you and your employees need to be ready to problem solve and accept change. Everyone will need to grieve the loss of the original plan and embrace change for what it can be: an opportunity for self-motivation and innovation. But first, everyone goes through a period of transition.

A Different Way of Doing Things

Perhaps you can relate to this example: Whenever I get a new laptop, I end up carrying around both laptops for a while. It sounds redundant, but there’s a reason I do this.

With the new laptop, I am thrilled with all the new tasks I can do with it. I feel excited by the size of its memory and the updated programs. I get stimulated by the idea of working on projects in a way I’ve never tried before. The possibilities seem endless with my new laptop.

However, I’m also fearful and uncertain of how to use all the new features, like the fact I can flip the screen down and make it a tablet. What if I do it wrong? What if I break the new laptop? What if I can’t get to my old files? I end up feeling anxious and worried that I won’t figure everything out before the next time I need the new laptop in a meeting or a training session. So, I bring the old laptop with me…just in case.

The change—buying the new laptop—was simple enough. It’s the transition—giving up my old laptop—that is challenging. The change is easy, the transition isn’t.

Change is something that happens in a situation. It’s a different way of doing things. So, while some may embrace change, they’ll still have to go through a transition period. This means giving up old ways, unlearning old skills, and adjusting to new patterns of thinking and activity. It’s uncomfortable for even the most change-prone among us.

In my experience, no one accepts change and transition from the get-go, even the people who appear to. There is a process everyone must go through to embrace and implement change—although some may go through that process faster than others.

Everyone begins in a neutral place at the status quo. They are observers of the change. Once the change is enacted and the transition begins, people generally fall into one of these three categories:

How each individual employee responds to change, and the subsequent transition process, is all a matter of attitude. A positive response can be encouraged and promoted, but at the end of the day, everyone will have a choice in how they choose to respond.

But this is just in reference to individuals. Let’s turn our attention to the general culture of the company. 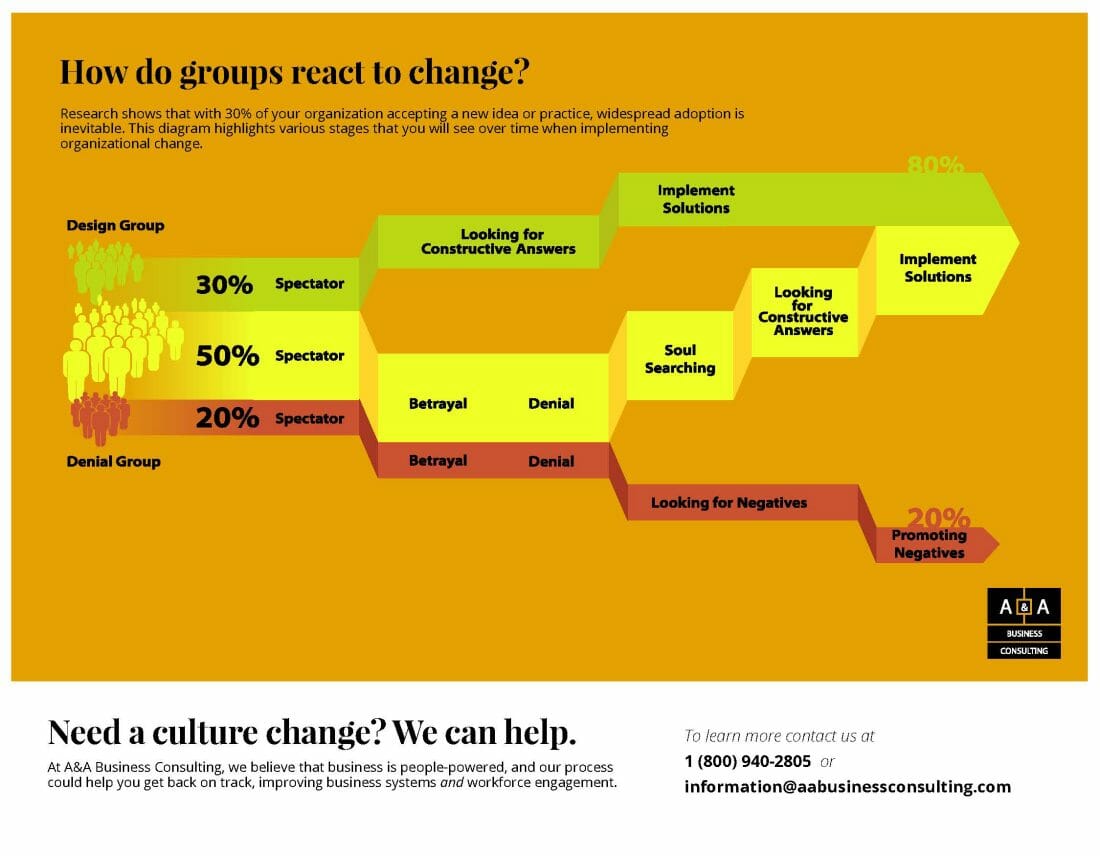 When implementing change on a broad scale, what percentage of buy-in do you think is required to turn the tide? 90%? 80%? Actually, research shows that as little as 25% buy-in is required to influence the rest of the group.

To begin with, Rosabeth Kanter, a business professor, published a study in the 1970s which showed the tipping point for changes in company culture. When a minority view held only 15% of the company’s employee base, it was treated with hostility and rejection. But move that number to just 35%, and the culture started to embrace the change. With 35% representation, those who wanted change could form alliances and create a counterculture which would shape the future. So, even though not every individual accepted the change, they could not halt the inevitability of those changes.

Then, in 2018, another study was published by Centola et al. to determine what percentage of activism was necessary to change a group consensus. Volunteers in the study were paired up and shown a picture of a stranger. They were then asked to suggest a name they felt matched the stranger. If they suggested the same name, they won 10 cents; if they didn’t, they lost 10 cents. Then, they switched partners and performed the same exercise. They continued to switch partners, suggesting names for the stranger and receiving a reward or punishment (the 10 cents), until one name emerged as the group consensus.

At this point, the researchers added “activists”—people who were given a different name to use for the stranger. Their goal was to shift the group consensus from the established norm to the new norm. The research concluded that if the activists made up less than 25% of the group, they would not be able to shift the group’s thinking. But once they hit that 25% mark, the group’s consensus was shifted every time to embrace the new name for the stranger. It’s the difference between committed minorities and non-committed majorities.

So what does this mean for you? Once 25% of change has been adopted by your employees, it’s unstoppable. By that point, those who haven’t adopted the change will fall behind. When you want to implement change, look for those will respond positively and empower them to be the activists within your company culture.

I would love to hear about your experience with change and transition.

What changes have you implemented recently within your company?

How did individuals respond? How did the group respond?

What questions do you have about creating smooth transition processes for your business? 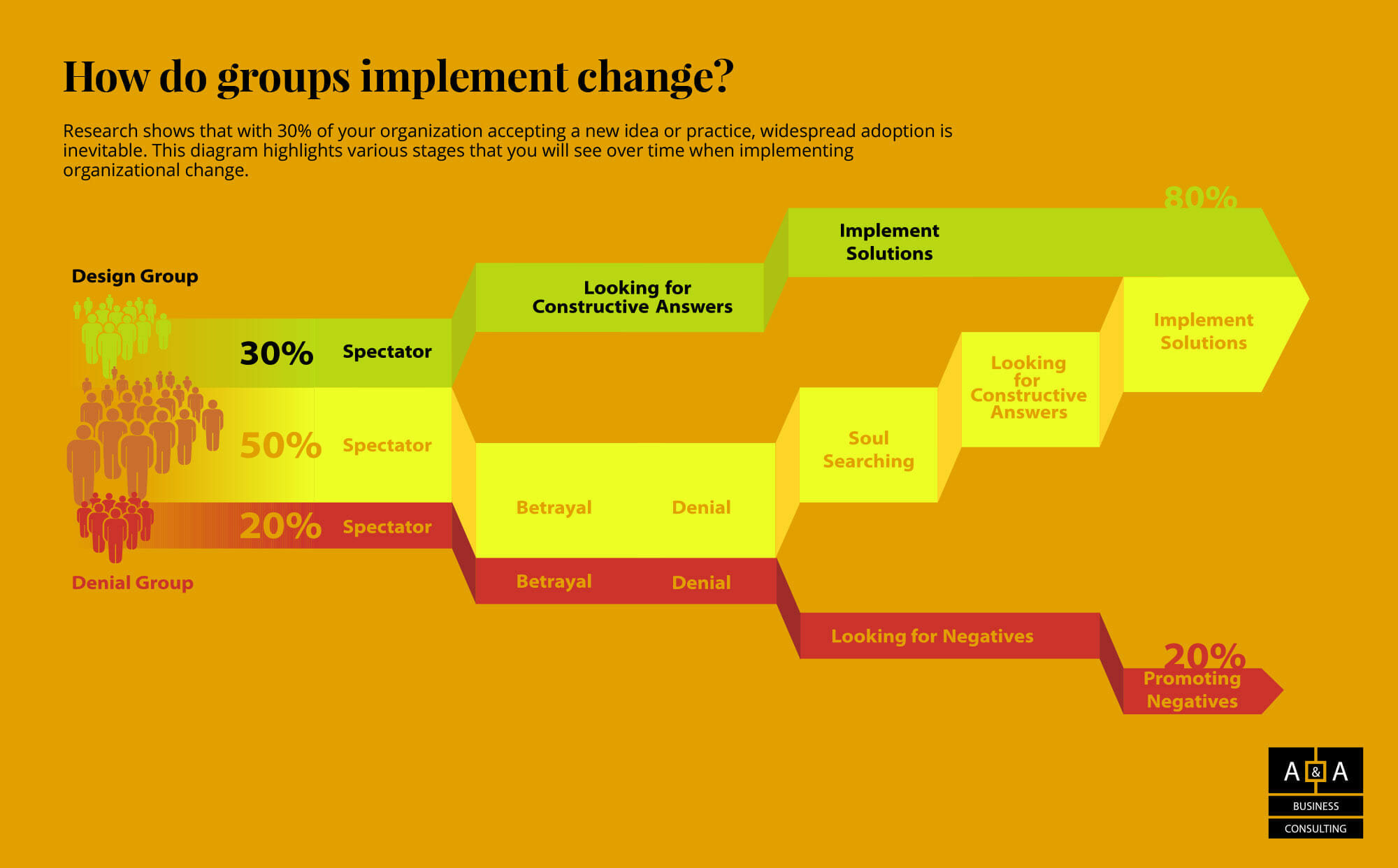