Toxic Management in the Workplace

When I mention the words “difficult manager” to my clients, many of them nod knowingly. Unhealthy work behaviors are fairly common, but many companies don’t know how to fix the problems once they’ve begun — or worse, decide to buckle down and deal with them long-term because that person contributes meaningfully to the company’s bottom line. It may seem as though your difficult manager is indispensable, but I’d argue that’s almost never the case. In fact, they might be harming your business far more than they’re helping it succeed.

It’s important to keep a close watch on your company’s culture, particularly when it comes to leadership. The longer damaging behaviors are allowed to continue, the harder they will be to stop when you do address them. It may not always be glaringly obvious, but these red flags should prompt a closer look:

Given to the tyranny of the urgent

Managers who fail to see beyond the immediate often lose vision for the big picture. What’s most urgent is not always most important, and good leaders must know how to distinguish between the two.

If your manager is willing to force all of their employees into overtime day after day in order to meet an individual sales or production benchmark, they’re likely not actually saving your company money. Just because a number looks good on a quarterly report doesn’t mean your best practice is being implemented. Look at the means, not just the end.

Innovation is encouraged. Constant change is not. If your manager consistently reworks systems that are functioning well or pulls people into excessive meetings and away from necessary work, they’re likely upending work stability and damaging the team’s effectiveness as a whole.

UNSEEN EFFECTS OF A TOXIC WORKPLACE

Of course, consistently forsaking the big picture to meet small deadlines or placing individual benchmarks above the company’s bottom line will eventually be evidenced in the numbers. There are also “unseen” effects to look out for, though — these  likely won’t show up on paper, but may prove to be even deadlier to your company if left unchecked.

The need to control every meeting or situation

“If I’m not in control, I’m being controlled” is a very unhealthy narrative that can creep in all too often. Your manager is in charge of their department, yes — but that shouldn’t make them an authoritarian in the workplace.

Constantly using “I” language instead of “we” language

Collaboration gets everyone further than command ever could. If your manager addresses everything with personal pronouns instead of factoring in the team, it’s probable that they are not delegating well, and may be carrying more than they can realistically manage.

Don’t fall into the trap of simply checking numbers and calling things good. Toxic managers have no problem getting the numbers they need through unhealthy means, creating a high stress process for their employees and spending more than they should to reach their goals.

Creating drama and rifts in the team

There’s just no room for drama in the workplace. Occasionally, interpersonal conflicts will arise, but if your manager is forming sides, stirring up the rumor mill rather than addressing the individual, or generally creating emotional instability, the quality of work will always suffer.

It seems simple, but if an entire team seems consistently discouraged, take note. There may be something deeper going on.

If you’ve identified a toxic behavior in one of your leaders, address it swiftly. If you don’t confront issues like this immediately, the toxic manager – and, likely, their team – will see this as acceptance or permission. The behavior will almost definitely get worse if not kept in check right away. In some situations, this toxic behavior can be identified and changed, assuming your manager is teachable and has the company’s best interest at heart. My advice: give these proposed changes one month to take effect. If things improve, fantastic! If they remain or worsen, it’s time to find a new manager. Your company’s culture, efficiency, and effectiveness is too valuable to allow prolonged unhealth to steer the ship. 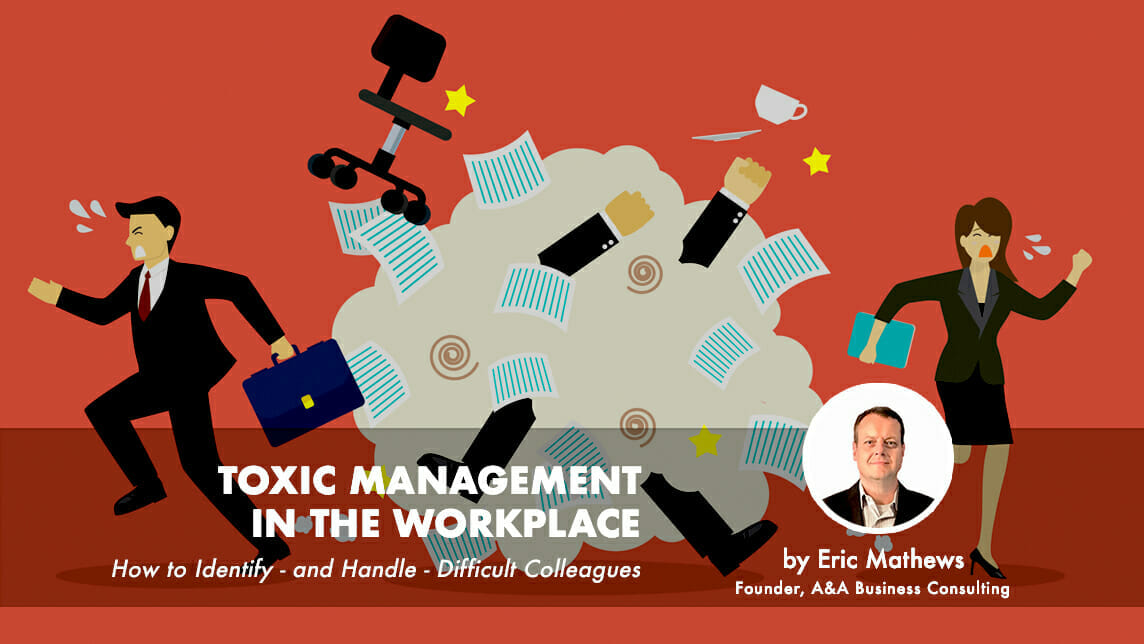