It’s Just a Matter of Time

…and how to accurately plan with it.

You likely have a general understanding of what everyone does at your company. Every person has a role and set of responsibilities, and for the most part, you think you know how much time it takes them to complete their work… or do you? The Project Management Institute reports that only a little more than half of all projects finish within their initially scheduled times–so where is all the time going?

I’ve been a consultant for over thirteen years, and I’ve seen firsthand just how little employees and managers understand the passage of time at work, especially when someone’s an “on the clock” worker. You (hopefully) have your detailed list of activities for your employees. But, though you’ve tried to budget the necessary time for each task, the work never seems to get done. Or it takes too long to get done. Or it’s done poorly because it was rushed. Whatever the case, it’s all a matter of timing.

In this blog, I’m going to break down three different perceptions about time, in regard to specific activities: the amount of time it ought to take, the time it’s reported to take, and the time it actually takes.

There’s the amount of time an activity ought to take.

This number is an ideal.

We feel we know what it ought to take–but that number could be wildly far from reality if it doesn’t take into account the tangible variables in a workplace. This estimate can also vary between managers and employee perceptions. So, it may be a good jumping-off point in establishing baseline expectations and negotiating an employee’s task load, but it can’t remain the realistic goal on an ongoing basis. To do so would result in tension and frustration on the part of both the manager and the employee.

These estimation mistakes, based on the “ought to take” perception, are also called a planning fallacy, a term coined by psychologists Daniel Kahneman and Amos Tversky. In their experience, most planning fallacies are a result of 1) “failing to consider how long it’s taken to complete similar tasks in the past” (or a reporting error, which I’ll address below) and 2) “assuming that people won’t run into any complications that will cause delays.” That’s what makes this perception an ideal, not a reality.

If you don’t have your activity list, or haven’t set baseline time goals for your employees, the best place to start would be to go off past data. How long did it take before? Can you prove that that is true when repeated? If it’s never been done before, how long did a similar project take? How long should it take when all the bugs have been worked out and people/machinery are working at optimal levels? Again, this can’t be the realistic goal, but these questions are an important place to start.

Then, there’s the amount of time an activity is reported to take.

As part of any time and task negotiations, the reported time plays a critical role. But it’s important to note this perception can be deeply flawed. We humans dramatically misremember time.

At the outset, some people tend to underestimate the amount of time a task will take. They believe they can get more done in the day than is possible. Maybe you’ve done this? Woken up in the morning, brimming with possibilities. As the day wears on, you begin to realize you overestimated the day’s potential. Your employees can overcommit themselves, and then struggle to explain the productivity discrepancy. Managers can also fall into this same trap regarding their employees–underestimating the time required for upcoming tasks.

On the other hand, when the activities are completed, employees tend to overestimate the amount of time it took. Though it took only 45 minutes, the employee may remember it taking it a full hour. This can result in time theft, where the employer ends up paying for misreported time. The company loses money and productivity in these kinds of errors.

Finally, there’s the amount of time an activity actually takes.

So you have your ideal in mind, the perception of how long it ought to take. And you have the time reported by the employee, which brings some issues into focus but still can’t be trusted. Now, we look at building a perception of time that is both realistic and productive. Here are a few keys I use while consulting to help managers refine this perception:

People rarely commit to how long something really takes. They generally give themselves a buffer of a certain percentage. For example, when you’re driving and your GPS reports you’ll arrive at your destination in 13 minutes, you’ll probably round up to 20 minutes, maybe 30 minutes if there’s traffic.

As you review your list of tasks and activities, know that the time estimated and reported will favor the employee and will most likely be conservative. They know they’ll have to answer for the work they’re committed to doing, and won’t want to risk committing to more than they are sure they can handle.

So, how to handle this? Check in throughout the day to encourage those employees meeting goals and talk through tasks that are lagging. If employees feel their job is at risk when they fall behind, they will be more likely to give you inaccurate time reports and estimates. Instead, make it a conversational process, not a punitive process.

Recent research by two Norweigian scientists, Halkjelsvik and Jørgensen, showed an interesting trend in time perception and productivity. They were able to eliminate time underestimation by changing the question. Instead of asking, “How long will it take you to perform Task X?” they asked, “Can you do Task X in Y amount of time?” This way of framing the question motivated participants to think more accurately about how time passed and what they were capable of performing.

When you allot time for various tasks and activities, try changing the question to better frame expectations. This subtle shift in perception can dramatically improve the way you negotiate tasks and commitments.

There’s no way around it. You have to observe and then plan based realistic expectations.

To get to true realistic expectations, the best method is to follow these steps:

With a recent client, there was a segment of the organization pushing to add additional resources to a global position, where that position was largely autonomous.  We followed the above steps including the optional step of having the employees log their time.  We did this because of their global autonomy, having someone observe the process in each region was going to take time to get set up.  What we found:

Once you know how much time is really required, you can factor in meetings, training, sick days, and so on to determine if you have the right number of employees to do the necessary activities. You can plan more effectively and project future goals with greater accuracy. By addressing time perception, without even taking into account process improvement, you’re starting to save the company money and increase productivity. 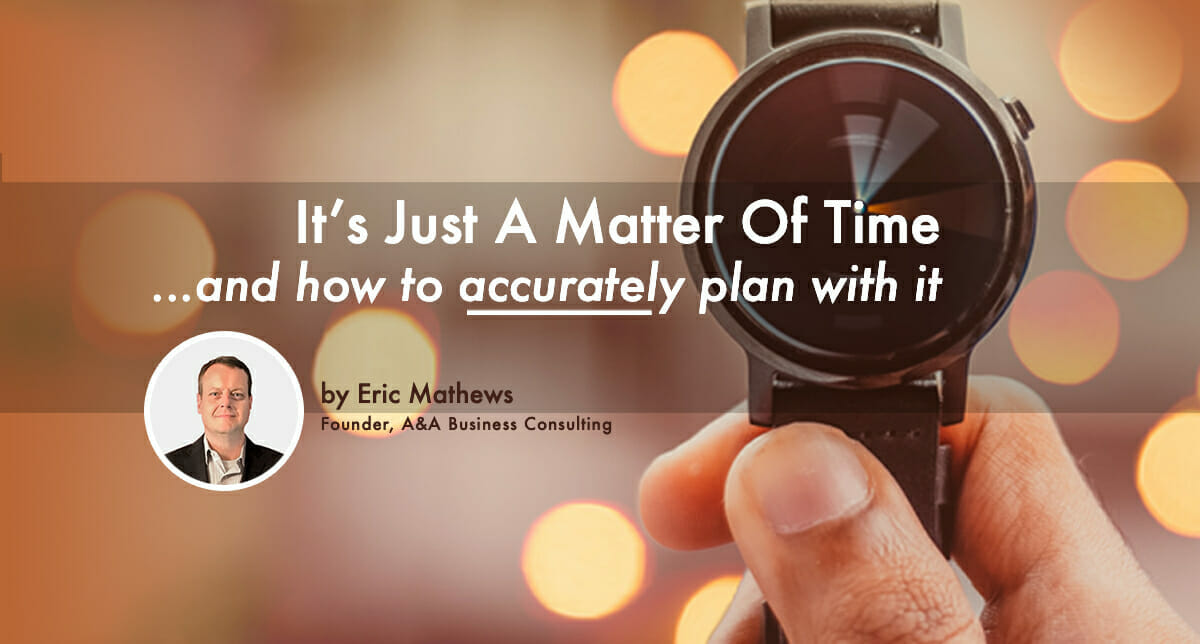